When you’re dead, they really fix you up. I hope to hell when I do die somebody has sense enough to just dump me in the river or something. Anything except sticking me in a goddam cemetery. People coming and putting a bunch of flowers on your stomach on Sunday, and all that crap. Who wants flowers when you’re dead? Nobody.

~ The Catcher in the Rye

Oakland Cemetery is reminiscent of a New Orleans cemetery, or someone told me because I’ve never been to New Orleans. That trip is on my bucket list soon to be completed next year during a ridiculous American tradition of alcohol and vomiting, otherwise known as Mardi Gras. Hey, everyone should participate in Mardi Gras once right? I digress, Oakland Cemetery is located in the heart of Atlanta. I love these amazing places that feel like you’ve walked into another world. I wish I had better photos of this place but once we got there it started to thunder and the rain soon followed. Starting my quest list was probably bad timing with the monsoon weather we’ve been having. There will be a Oakland Cemetery Part II coming soon…..

So fun facts about Oakland to quickly tell you:

Here are some famous people who reside at Oakland:

I almost forgot to mention a small side trip worth having. As I mentioned before it started to thunder and rain before I had a chance to really explore the cemetery. As we were starting to walk back through to get to the car we happened upon a clearing in which big bold letter across the street read, SIX FEET UNDER. Now, I’ve been to the other location but this was awesome. So if it’s raining or you need a refreshing break, check out Six Feet Under. It’s right across the street. We went up to the roof and sat under the patio umbrella looking out onto Oakland Cemetery and had a few delicious brews until it stopped pouring down rain.

Here are a few pictures. My good Canon camera was stolen by someone who clearly sucks the marrow out of life. But I will boast that my Samsung Galaxy 3 takes some decent photographs. 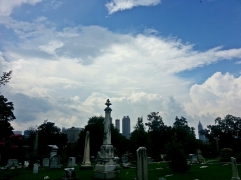 You can see the city way in the back!

There are so many things to marvel at!

The death of the English language happened and here is the grave site.

It’s amazing to think how old some of these are! 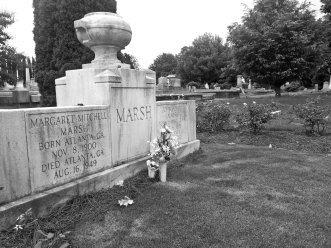 This was slightly creepy to me

This looks like fairies may spend their afternoons here.

Anyone who likes taking pictures will have fun here.